Preheat the oven to 180 degrees. Line the bottom of two 23cm round sandwich tins with baking paper. Grease the sides of the tin with either an oil spray or melted butter and then dust with cornflour, gently tapping out any excess flour.

Triple sift together the cornflour, custard powder, cream of tartar and baking soda and set aside. In the bowl of a stand mixer place the egg whites, begin to whip them with the whisk attachment. When they reach soft peak stage start to add the sugar about ¼ at a time, whisking for a couple of minutes between each addition

Once the whites are glossy and all of the sugar has been added, add the yolks back in one at a time while the mixer is running on a medium speed. Fold the dry ingredients in to the egg mixture, 1/3 at a time. Taking care not to knock too much air out of the eggs. Carefully divide the cake mix between the two cake tins evenly. Spread out across the top and place in the oven. Bake for approx. 20 minutes. Check the sponges once they are puffed up and golden brown. Don’t be tempted to open the oven before around the 20 minute mark. Once the sponges are golden and cooked, remove from the oven and leave to cool in the tin for 10 minutes before carefully turning out. Allow to cool completely before filling.

Whip some cream. Spread one half of the cake with jam, followed by whipped cream and then top with the second sponge. Finish by dusting with icing sugar and then enjoy! 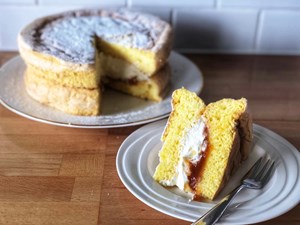