Remove the ham from the pot and allow it to cool slightly. Meanwhile, place the mustard and sugar in a small mixing bowl and add just enough of the rum or whisky to mix it to a thick, sludgy paste. Carefully cut away the skin of the ham, leaving a smooth, even layer off at over the meat. Place the ham in a large roasting tin, then score the fat layer with the point of a sharp knife in a coarse diamond pattern, but not so deeply as to go right through the fat to the meat.
Slosh the remaining alcohol over the fat and then spread the glaze mixture all over it in an even layer. Stud the fat with cloves at regularly spaced intervals.
Roast the ham in an oven preheated to180°C/Gas Mark 4 for 1-1 1/2 hours, until the glaze is a dark, golden-brown, bubbling crust.
Serve hot or cold 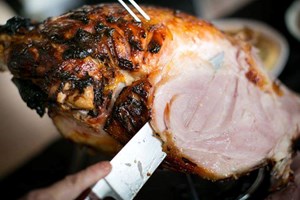